In the modern world of cloud native application development more and more organizations are moving away from classic bare metal deployments and are adopting technologies like containerization and orchestration for a more efficient and sustainable way to deploy applications at scale on different types of infrastructure.

Even though the way we’re packaging and deploying applications is changing, the importance of continuously ensuring and strengthening security posture of our systems is still extremely crucial. With containers and container orchestrators like Kubernetes, security controls must be implemented at multiple levels and it’s important to understand what those levels are once you start containerizing your applications. 🔑

In this blog post I would like to talk about how you can minimize the attack surface of the containerized .NET applications with Chiseled Ubuntu Containers which have recently introduced support for .NET 6 and now .NET 7 applications targeting Linux operating system.

Container Security - pitfalls and must do’s

Before we dive into Chiseled Ubuntu Containers let’s set the baseline by looking at some pitfalls when it comes to container security and what are the must do’s in order to protect containers against those.

One of the most important security improvements that you can have in place for containers is to configure them to run with a non-root user. You can also consider using rootless containers or rootless mode if it’s possible and is supported, for additional container hardening.

By default if you don’t provide a user that container should run with, root user will be used. Unless you’re using rootless containers, which we will talk about shortly. The big security risk here is that container has access to the host system (a server, a VM an application container is running on, a Node in Kubernetes) and can access and modify content on the host as a root user, with the same level of permissions! If there’s a vulnerability in the application that’s running in a container or if a container is misconfigured and malicious actor figures it out, he/she may be able to exploit it and get access to the host system with root user’s level of permissions! Just imagine how harmful this can be - I wouldn’t wish anyone to experience that. 🙀

When a third-party image doesn’t provide a possibility to run with non-root user, it may be possible to create a custom image based on the original image where you can explicitly define an unprivileged user that container will run with. But there are cases where this is not that easy to do: for example, default ASP.NET image doesn’t let you off that easily: Unable to start Kestrel. System.Net.Sockets.SocketException (13): Permission denied while running alpine as non root user. Often the reason is the default port that container is binded to - there is a restriction in Linux OS which requires a root user if you’re using a port that is lower than 1024. Port 80 is often used by default which falls under this limitation. Shortly we’ll see how Chiseled Ubuntu Containers come to the rescue in this case!😺

Once you start using third-party images it’s important that you do your research in order to understand if those images use root user by default or not, and which options are available in order to configure the image in the most secure way. When building your own container images, do ensure that you’re not using a root user unless it’s absolutely necessary. It’s also a good idea to implement checks for this type of misconfiguration, for example with Azure Policy. Using policies as an additional security control can help you automate detection of different types of misconfigurations and alerting in case a fix is required.

Rootless containers/rootless mode is a great security enhancement in the containerization world, but it has quite a few limitations which at this point narrows down the use cases where you will be able to adopt it. If you would like to learn more, you can check out this link: Rootless Containers

Using Security Context will ensure that not only the container is built with the correct default user with minimal privileges, but also that the user is correctly set when the container is running in a Pod in a Kubernetes cluster.

In most cases, when packaging your applications in a container you will need to use a third-party base image that is built upon an operating system of your choice and has necessary frameworks and tools installed that your application may need in order to run successfully. For example, if you want to run an ASP.NET 6 application on Linux, you would need a base image that includes a Linux distribution of your choice and has ASP.NET 6 installed. In many cases though third-party images may contain lots of unnecessary tools and libraries that your application doesn’t need. Having lots of unnecessary components installed results in a broader attack surface for malicious actors to explore. In addition, the more components you have, the more security vulnerabilities you may need to handle.

To sum it up, in order to strengthen container security and mitigate common pitfalls you should:

Now, let’s take a look at what Chiseled Ubuntu Containers are and how they can make it easier for us to mitigate common container security pitfalls mentioned above in containerized .NET applications.😼

Please note that at the point of writing this blog post .NET with Chiseled Ubuntu Containers is still in preview and should not be used in production environments. This blog post will be updated once the functionality reaches GA.

What are Chiseled Ubuntu Containers? 🤔

Chiseled Ubuntu Containers are a minimal version of Ubuntu image with enhanced security:

Chiseled Ubuntu Containers (CUC) are available from Ubuntu version 22.04 (Jammy). CUC are built based on the original Ubuntu 22.04 OS, but are heavily stripped to include only what’s necessary, and are extra hardened in terms of security following least privilege principle. An advantage of CUC is that it significantly reduces the attack surface and total amount of security vulnerabilities that you may need to handle. Another advantage is the total image size - compared to the original ASP.NET 6 Ubuntu Jammy image, ASP.NET 6 Chiseled Ubuntu Container image is at least 100MB smaller! 😻

If you haven’t worked with minimal container images before it will require a mindset change and some getting used to. Since there’s no shell installed you will not be able to just log into the container and start running shell commands like you can do with regular images. If you think about it though, in the real-life production world this is not something that you would want to be able to do either so, using this type of images can definitely help you with shifting left on security by creating and managing containers in a secure way from the start.

Chiseled Ubuntu Containers come with some limitations which you should be aware of and prepare for:

You can find the source code for Cat Encyclopedia app in this GitHub repo: cat-encyclopedia

The process is pretty straightforward and as creators state themselves, shouldn’t require any modifications for most of the applications. First of all we will need to update the base image in Dockerfile from mcr.microsoft.com/dotnet/aspnet:6.0-jammy to mcr.microsoft.com/dotnet/nightly/aspnet:6.0-jammy-chiseled. Please note that for now .NET images built with Chiseled Ubuntu Containers are available for download from nightly repos while this functionality is still in preview. Also, we must ensure that we’re binding our container to a non-privileged port, i.e. a port that is higher than 1024. By default Chiseled Ubuntu Containers use port 8080 so that’s the one we will use as well.

Please note that Chiseled Ubuntu Containers are supported on AKS version 1.25 or newer since it requires Ubuntu 22.04 on the Nodes as well.

We’re all set! Now, once we build new container image and Helm chart, we can deploy Cat Encyclopedia to AKS and it still works as expected with Chiseled Ubuntu Containers! 🥳 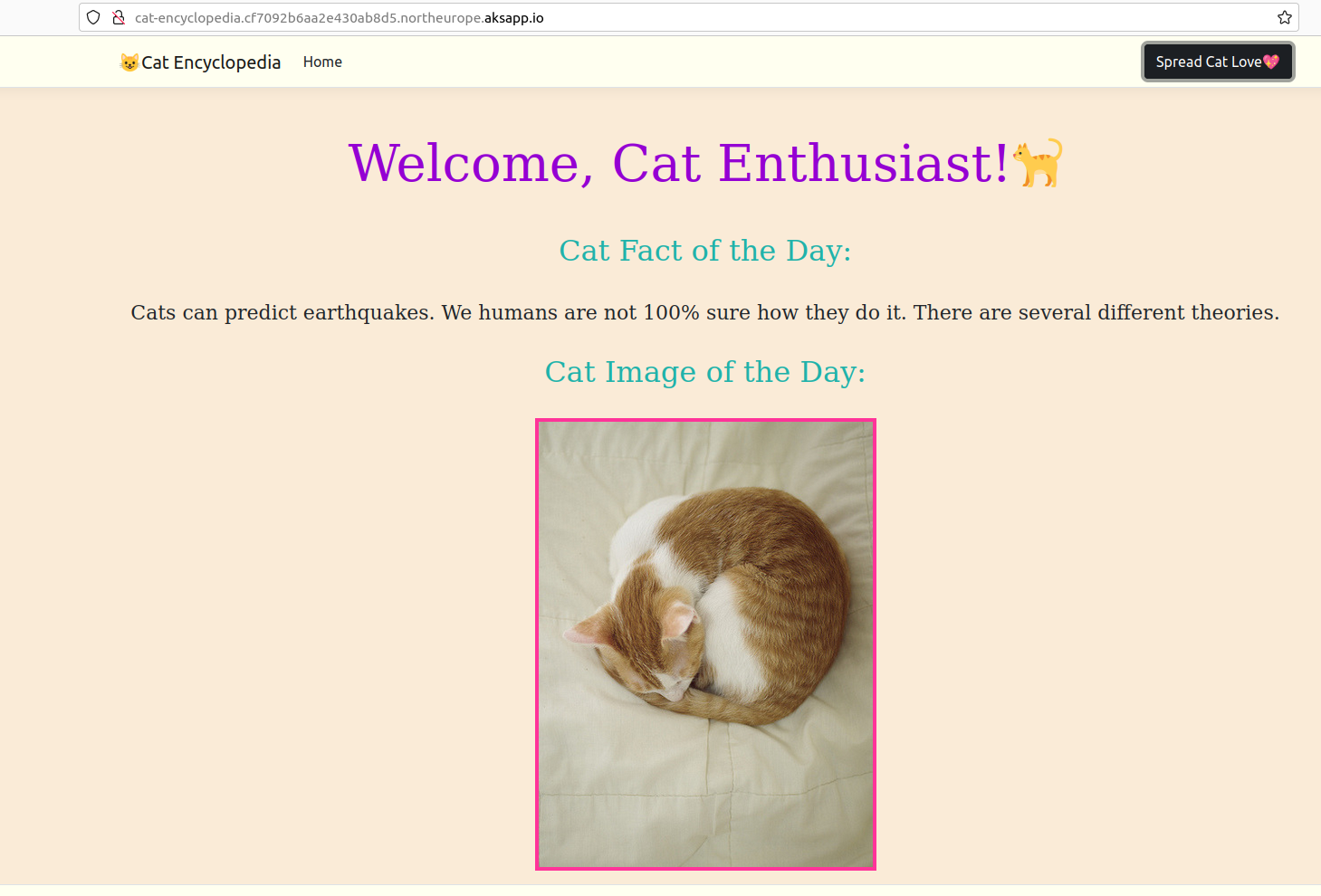 If we want to upgrade it to ASP.NET 7 we will only need to update application source code to target .NET 7 and update the base image in the Dockerfile to mcr.microsoft.com/dotnet/nightly/aspnet:7.0-jammy-chiseled.

We can compare the size of the image before and after we started using Chiseled Ubuntu Containers with docker images command - as you can see in the screenshot below the latter is 100MB+ smaller, just as stated in the release announcement😁

Let’s run a security scan for both of the images and see how many vulnerabilities will be detected in each case. For this purpose I have used a tool called Trivy. For the initial Cat Encyclopedia image which was built upon ASP.NET 6 Ubuntu Jammy base image Trivy detected 16 security vulnerabilities related to the operating system packages:

Whilst for the updated Cat Encyclopedia image which was built upon ASP.NET 6 Chiseled Ubuntu base image Trivy detected ….

This is a pretty impressive result in my opinion, what do you think? 😺

Finally, let’s give it a test and try to start a shell inside a running CUC container and run some shell commands, for example, to check what packages are installed in the container - as you can see in the screenshot below, we’re not able to do that and it makes sense since Chiseled Ubuntu Containers don’t have any shell installed. But, we can run dotnet commands since .NET CLI is needed for the ASP.NET container and is therefore pre-installed as part of the base image.

Below you may find a few resources to learn more about Chiseled Ubuntu Containers for .NET applications and securing containerized applications in general:

That's it from me this time, thanks for checking in!💖

If this article was helpful, I'd love to hear about it! You can reach out to me on LinkedIn, Twitter, GitHub or by using the contact form on this page.😺