My Journey Through Journey

I haven't been much of a gamer actually but there have been some games that managed to keep my interest and attention for quite some time. The highlight of my gaming activity was in the beginning of 2000s - when I used to come home from school and complete all of my homework - as a reward I would be allowed to spend some hours playing games on the good old Windows XP. Some of the games I played a lot as a kid were GTA: Vice City, Return to Castle Wolfenstein, Tomb Raider series, The Mummy, KAO the Kangaroo, Dungeon Siege…Oh, and of course it was a must to play Quake over LAN when the informatics teacher was out of the classroom.

When I graduated from high school there was a stagnation period in my gaming life until I entered Informatics studies and got to know many more nerds and experienced gamers.

So, what is my Journey? This is a bunch of very warm and colourful emotions but at the same time it's a place to meet yourself, to fill-up your inner positive energy jar and to re-discover some magical emotions that may have faded in the everyday routine.

That's how I remember it….

…I have discovered myself in the middle of the unknown, an enormous dessert filled with secrets of the fallen civilization. Why am I here? Where have I been before this very moment? What is my purpose? Will I ever find the answer to these questions and am I supposed to find it? I can see a mountain, stately located behind the horizon of silky golden sands…this mountain was to define the further steps in my Journey. 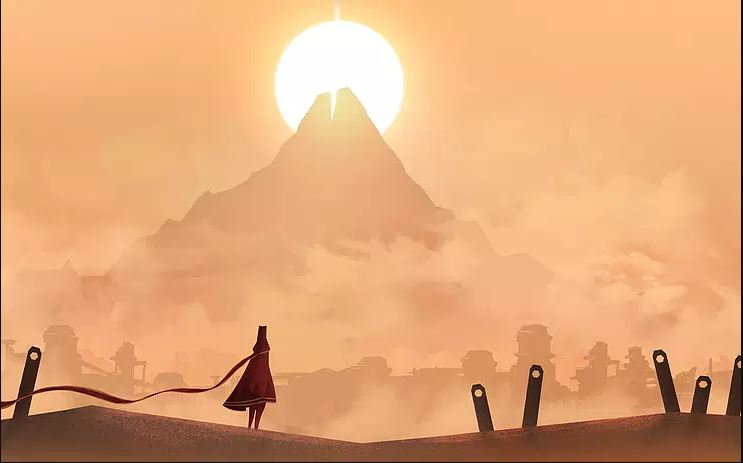 While I smoothly drift along the dessert and fly up high to the top of half-destroyed temples in search for concealed messages, I can't stop thinking of what surrounds me..What made this place disappear? Will it await for me there, on the top of the mountain? Who were those living here before? Only the flying creatures, helping me to keep up the energy, know the stories that are never to be told..

Suddenly I see a silhouette in the distance - I don't know who it is and if it a name. I don't know where it comes from and what it's story is. I can't ask and I can't get an answer but we can sound…We can use only sound, together making it a music stream, a never-ending song of peace and equality, flowing in harmony along the clouds above the forgotten civilization. And what's more valuable is that it wants to share the sacrament of the Journey with me. And from that moment on I'm not alone anymore. 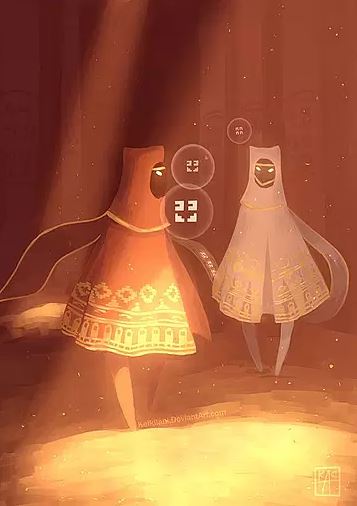 Gratitude. That was the feeling I had in the end. For the quality time with my inner self. For the colours, music and sounds. For the guiding light and tiny secrets being discovered on the way. For the privilege of acquiring knowledge about the mystery of the faded civilization. For the opportunity to look at myself from the new angle. And gratitude to the unknown fellow traveller who has shared this experience and this Journey with me.

The story of my Journey is long and discoveries have been many (and I don't want to include all the spoilers in this post) but your Journey will be different from mine though the main idea will stay the same. This game is about beauty of inner self, beauty of the world you are living in, and beauty of the fellow travellers, mysterious but much alike yourself, taking the chance to experience your Journey and unite it with theirs. And it's also about gratitude - for everything you sense and receive unconditionally during the game and maybe even outside of it.

In conclusion, I would like to pay my respect and gratitude to: 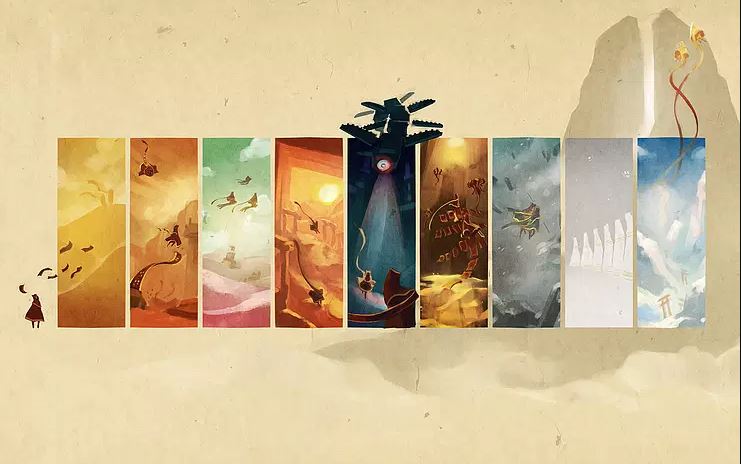 I cincerely hope that if you haven't tried this game, you've at least gotten a bit curious about it and will give it a try in the future.