In the first part of this blog series I would like to talk about Azure DevOps Environments, benefits of using it for deployment of applications to AKS or any other Kubernetes distribution (or even a VM), and provide a few tips and tricks for how ADO environments and resources can be created.

What is an Azure DevOps Environment?

Now, let's take a look at how you can group resources in Azure DevOps Environments and which alternatives worked well and not that well from my experience.

There are multiple ways you can group applications in Azure DevOps Environments and it really varies based on what needs you may have in your project, but I would like to share a few alternatives which worked well and not that well for us. These groupings are applicable for applications that are deployed to one or multiple development/staging/production AKS clusters.

One point that is important to mention straight away is that it's not allowed to create multiple Kubernetes resources with the same namespace in a single environment, even though they may be connected to different Kubernetes clusters. If you attempt to do that, you will get an error saying "Failed to create resource. Resource [resource_name] already exists in current environment.". This limitation heavily impacts suggested grouping alternatives described below.

One Environment representing all development/staging/production clusters

This grouping alternative was the one we started with and quite quickly realized that it wouldn't work well for us, due to the namespace limitation mentioned above. In this case you create a single Azure DevOps Environment which represents all AKS clusters used per stage. Let's say that you have 2 clusters used for development workloads and 2 clusters that are used for production workloads. In that case you would create one environment called something like "aks-dev" and one environment called "aks-prod". For each of the respective environments you would then add all applications that are running on different clusters in development and all applications running on all existing clusters in production. I've attempted to illustrated such implementation in a diagram below: 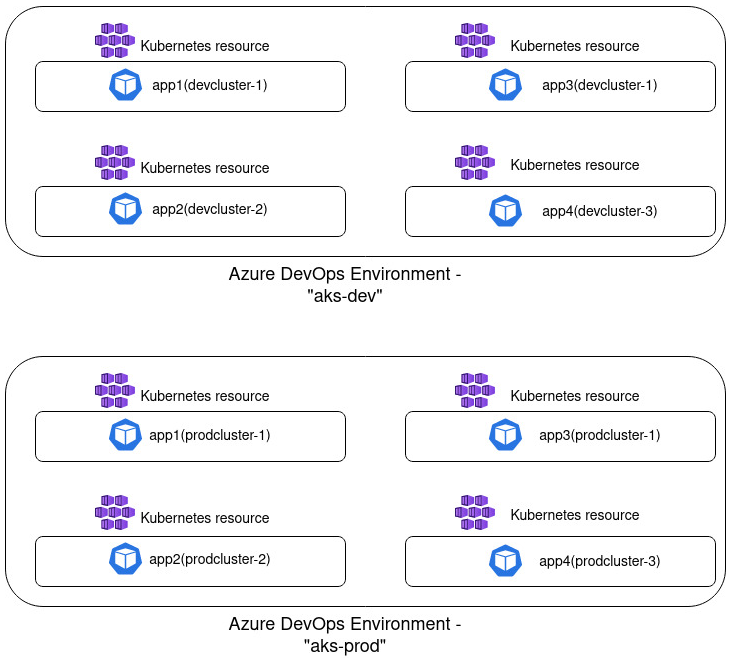 There are a few disadvantages with this approach. Firstly, the limitation mentioned above: if you're using the same namespace across clusters you can't create multiple resources with the same namespace as part of a single environment. Secondly, such grouping can become quite messy and less readable: the more resources you create, the harder it becomes to get an overview of which resources are deployed on which cluster and there's no possibility to filter the resource list. Due to these factors the next approach worked much better in my case.

One Environment representing one development/staging/production cluster

In this implementation you create one Azure DevOps Environment that will represent applications that are deployed in a single Kubernetes cluster. If you have two development clusters for instance, you will then create one environment per cluster, something like "aks-0000-dev" and "aks-0001-dev". I prefer using following naming convention when creating ADO Environment: [kubernetes_distribution]-[cluster_id]-[deployment_stage]. Such grouping is visualized in the diagram below: 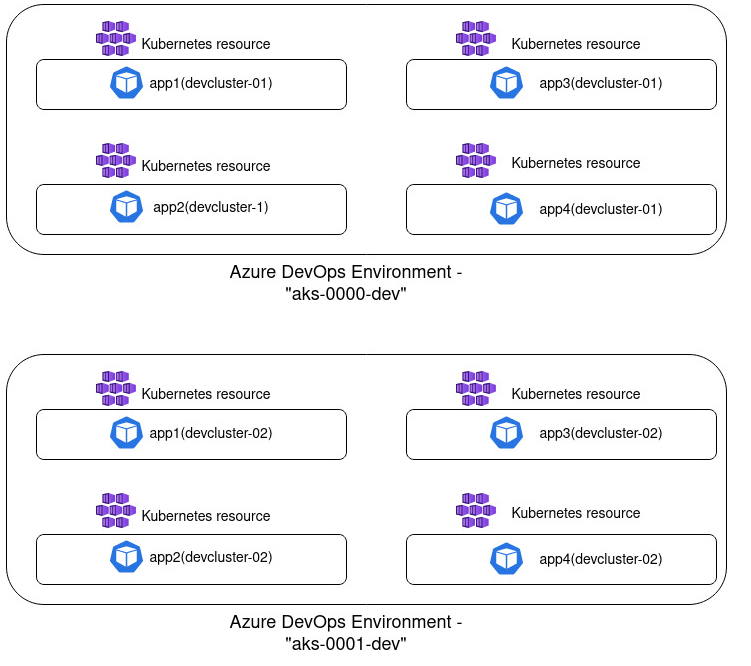 From my experience, this grouping has worked pretty nicely and in my head it seems like quite a logical grouping. I see a single environment as a representation of a deployment location which is a single AKS cluster. And inside a cluster there's a collection of resources - all active workloads, i.e. applications that have been deployed to it. You don't face the namespace limitation and such grouping provides a good overview of what is deployed in a single location which may be less overwhelming for external parties who don't necessarily work with Kubernetes on a regular basis.

One Environment representing one application deployed in development/staging/production cluster

This approach is visualized in the diagram below: 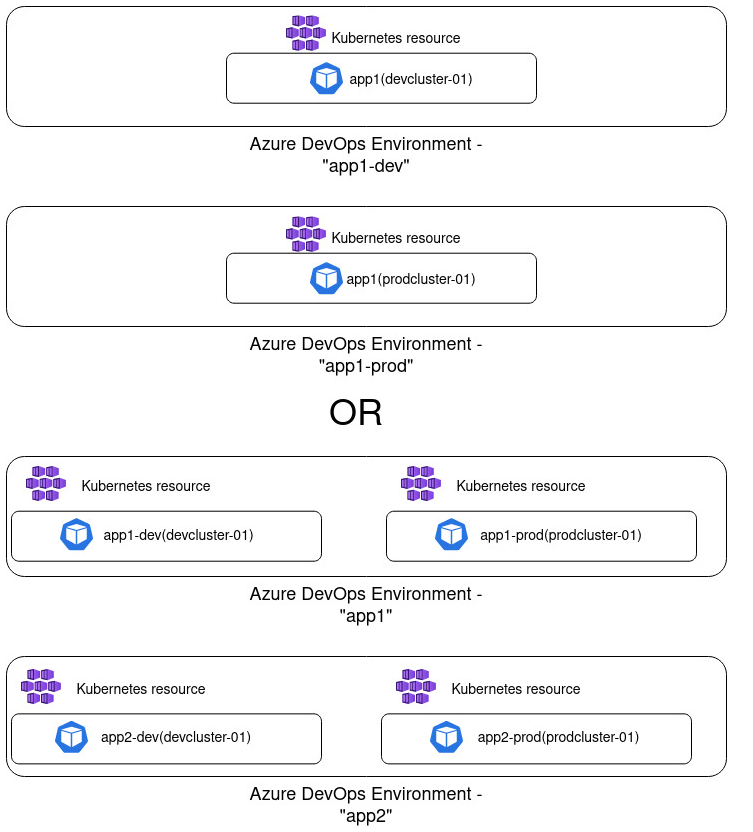 I think that this approach can potentially create quite a lot of overhead, especially if you have tens of applications which once again will provide less overview and reduce readability. Often you would want to use the same namespace for your application deployment for consistency and simplicity, independent of where it's being deployed, be it in dev or production.

Every project is different of course and I wouldn't be surprised if some of the approaches that haven't worked well for me worked out pretty nicely for you!😺 But I hope that my experience can make it easier for you to choose how to implement ADO Environments and which alternative would work best for your specific scenario.

In part 2 of this blog series we'll get more hands-on and deploy an application to an AKS cluster with Azure DevOps Environments. We'll also take a look at how we can faster migrate resources to another ADO Environment (with a sprinkle of automation 😼). Stay tuned!

That's it from me this time, thanks for checking in!

If this article was helpful, I'd love to hear about it! You can reach out to me on LinkedIn, Twitter, GitHub or by using the contact form on this page 😺