Hey! I'm Kris and I like to code. Welcome to my tech corner!🤗
Azure Hero and Microsoft Azure MVP⛅️ | Open-Sourceress🧙🏻‍♀️ | Volunteer🦾 |
Cat Mom 🐈🐈🐈 and Potterhead

Setting Up OAuth 2.0 Authentication for Applications in AKS With NGINX and OAuth2 Proxy

Introduction and use cases

Today I would like to show how you can set up authentication with OAuth 2.0 for applications that are running in Azure Kubernetes Service with help of NGINX Ingress Controller and OAuth2 Proxy.

There may be multiple reasons for why you would want to implement authentication with OAuth 2.0 this way. For example, you may not want to implement authentication logic in the application itself or, like it was in my case, you want to limit access to a third-party application that you're running in your cluster in case authentication is not natively supported by the application itself (or requires an Enterprise license for the same😃). I was recently working on implementing an open source version of kubecost for cost management in our AKS clusters and the thing is that the open source version of kubecost doesn't natively support authentication. You can enable support for SSO with SAML 2.0 by acquiring an Enterprise version of kubecost which was not applicable in my scenario. Nevertheless, I still wanted to expose kubecost instances so that other teams and business stakeholders can easily access those and check whatever data they need. At the same time I still wanted to limit access and protect the application so I had to look for an alternative solution. And that's where NGINX Ingress Controller and OAuth2 Proxy come into play!😺

With just a few configuration changes in NGINX Ingress Controller and a lightweight proxy application it's possible to easily configure OAuth 2.0 authentication with Azure AD as an identity provider. So let's take a look at how we can do that!🌟

Setting up authentication with OAuth 2.0

I will be using kubecost as an example application in this walkthrough. It's now deployed in an AKS cluster and is exposed without any authentication (yet!) on this example URL: https://kubecost-kris.unicorndomain.com. Now, let's protect it by setting up an OAuth2 Proxy.

In order to do that we will need to perform following steps:

🐾 Create an application in Azure AD which will represent OAuth2 Proxy application that we're going to implement later;

🐾 Configure and deploy OAuth2 Proxy application which will act as a reverse proxy and provide authentication to kubecost with Azure AD;

In order to create an OAuth2 Proxy application we need to go to App registrations section in Azure AD and choose New registration. Then provide following properties:

🐾 Name of the Azure AD application. Since I'm setting it up for kubecost, I'll call it kubecost-oauth2-proxy.

🐾 Azure AD single-tenant or multi-tenant account types. In my case there's only one directory being used, therefore I will choose Accounts in this organizational directory only.

🐾 Redirect URI which will represent an application URL that will be receiving an authorization code on behalf of the application. Since we're using an OAuth2 Proxy, a redirect URI in our case is a public URL of your application plus oauth2/callback, i.e. https://kubecost-kris.unicorndomain.com/oauth2/callback

Once all properties are provided, click Register - the application will then be created for you in Azure AD. 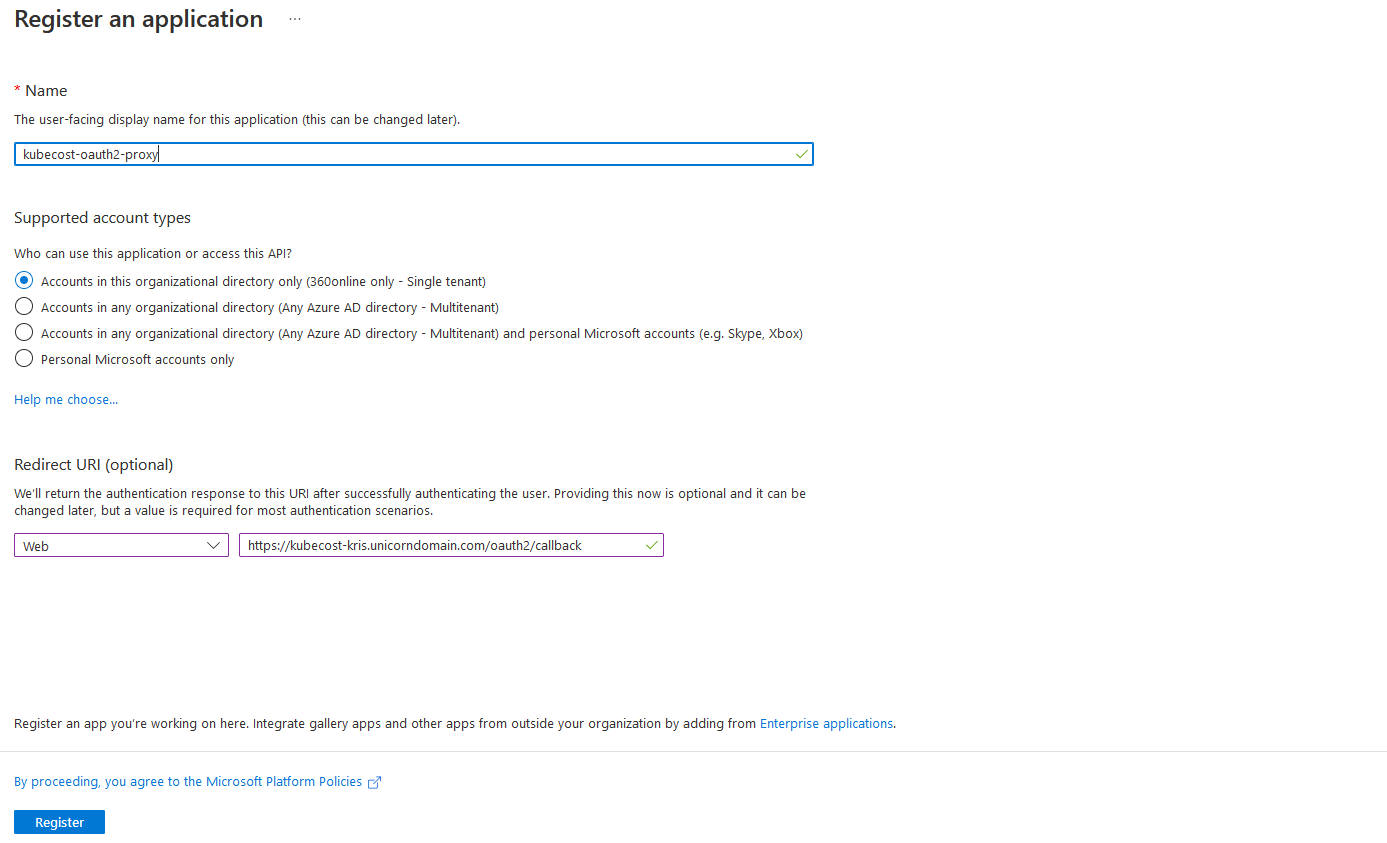 Next, we'll need to create a client secret which will allow OAuth2 Proxy to perform authentication on behalf of our application. In Azure AD, navigate to recently created application. In Certificates & secrets section choose New client secret. Then provide following properties:

🐾 Description that explains what the secret will be used for. In my case it's kubecost-oauth2-proxy-secret.

🐾 Expiration lifecycle of the secret. For better security, choose at least the recommended lifecycle which at the moment of writing this blog post is 6 months. If you can automate secret renewal, do choose as short lifecycle as possible.

Once all properties are provided, click Add. Once the client secret is created, do ensure to copy it and save for a later step since the secret will be shown to you only once, right upon creation. 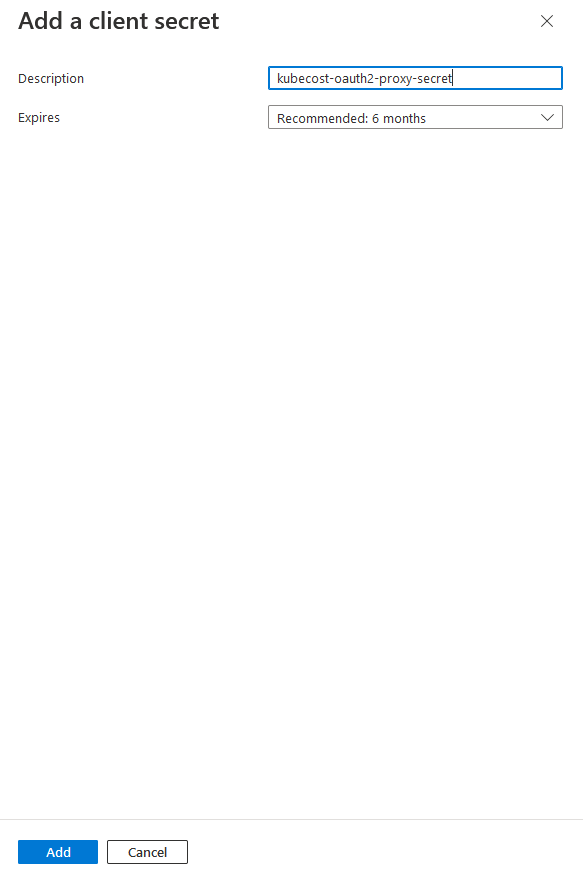 Finally, go to the Overview section of the recently created application in Azure AD and make a note of Application (client) ID and Directory (tenant) ID which we'll need later.

Now we're done with setting everything up in Azure AD - let's prepare our application's Ingress next!😺

In order to be able to expose our application publicly, we need to create an Ingress. Since my kubecost application is already exposed, I have an Ingress resource already which looks something like this:

Since I've deployed kubecost with Helm and current Ingress belongs to the same release, I've added additional annotations which will let Helm include and manage this Ingress resource as part of the kubecost release. You can read more about adding Kubernetes resources to existing Helm releases here: How to Include New Kubernetes Resource Into Existing Helm Release

Now, the only thing we will need to do to configure support for OAuth 2.0 authentication is to add following annotations to the Ingress object:

🐾 auth-url: Annotation that represents URL to the authentication service where requests must be sent.

🐾 auth-signin: Annotation that represents URL to the location of the error page:

So, in my example the final kubecost application Ingress definition will look like this:

Last thing we'll need to do is to install a proxy application which will authenticate the requests coming into our main application, which in my example case is kubecost. There are many good open source alternatives for such a proxy out there but I can recommend the one called OAuth2 Proxy - it's well maintained and has a big community support. It's also recommended by NGINX. You can find more information in OAuth2 Proxy GitHub and documentation by checking out the links in Additional resources section below.😉

OAuth2 Proxy doesn't have a Helm chart so we'll create a Kubernetes YAML template and include it as part of the kubecost Helm release by adding a few annotations to the OAuth2 Proxy Ingress definition.

But before we do that, we need to make a few preparations first. OAuth2 Proxy requires some information from us in order to work properly:

Since we've made a note of tenant id, client id and client secret what we need to do now is to generate a cookie secret. Cookie storage is the default storage type used by OAuth2 Proxy to store information about a session in a client-side cookie, therefore setting a cookie secret is mandatory. You can also use Redis as an alternative session storage but it's outside of scope of this blog post. You can read more about OAuth2 Proxy session storage options here: Session Storage

It's an important and good practice to always generate a strong secret, using cryptographically secure random number generator and never re-use the same secret across applications! Since cookie secret can be used for sensitive information like storing user session data, in the wrong hands this information can cause a lot of damage and even let attacker get control of the server hosting an application. There are several ways to generate a cookie secret, for example with OpenSSL: openssl rand -hex 32. Once you've generated a secret value, make a note of it, we're going to use it in a second.

The last thing we need to do before we can deploy OAuth2 Proxy is to save Client ID, Client Secret and Cookie Secret as Kubernetes Secrets. Of course we could've just written them in plaintext in the Deployment YAML but we're conscious about security, right?😼 We want to keep secrets secret, therefore we'll deploy sensitive values as Kubernetes Secrets.

In AKS cluster where OAuth2 Proxy will be installed, in the namespace where your application is running (in my case it's kubecost), run following commands with kubectl in order to create secrets for the respective values:

You can also create Kubernetes Secrets from file by using --from-file instead of --from-literal where you provide the values directly in the command line - you can find more about it here: Managing Secrets using kubectl

Wherever you can see kubecost mentioned in the example template below, you can replace it with the name of your specific application.

A few things to be aware of:

Once you've verified that configuration and the template look correct you can deploy OAuth2 Proxy in AKS cluster where your application is running with following kubectl command: kubectl apply -f ./my-path-to-template/oauth2-proxy.yaml

And it's done! Now, when you access the application, you will first be redirected to the Microsoft authentication. 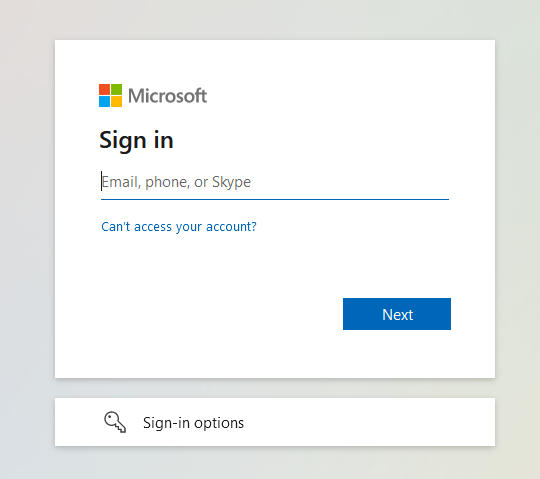 If you will be using OAuth2 Proxy that I have used in this blog post there are a few known issues you should know about and how those issues can be mitigated.

Your updated args section will look something like this:

You can find all the Kubernetes YAML deployment templates as well as a PowerShell script that includes all the necessary commands to create an Azure AD application and installs OAuth2 Proxy in my GitHub repo: guidemetothemoon:oauth2-proxy

A few resources I've found useful on this topic:

That's it from me this time, thanks for checking in!

If this article was helpful, I'd love to hear about it! You can reach out to me on LinkedIn, Twitter, GitHub or by using the contact form on this page 😺