Why should you care about security of third-party dependencies

No matter how small the application you're developing is, at some point you'll end up using code that has been developed by someone else, i.e. you'll be adding third-party dependencies to your source code. Deciding on when you should create a specific functionality yourself or when you should utilize a third-party library depends on the security and privacy requirements for your application, time restrictions, maintenance cost, available resources, size of implementation and many other factors. I will not go into detail about when you should choose what, but I would like to underline that it's important to evaluate every case individually and perform third-party risk assessment where possible.

Let's take a look at one example where we could introduce a third-party dependency. I'm developing a web application for my online store and one of the important requirements I would define for it is resilience. When the application is up and running in production and is being accessed by a lot of users from all over the world, there are many factors that can affect how the application performs and responds to hundreds, or even millions of simultaneous requests targeting it. In order to make my application resilient and self-healing I would like to implement resilience features like retry logic for specific operations, fallback to a defined behaviour upon failure, circuit breakers, etc.

How can I do that? Well, I can either develop this functionality myself or I could utilize one of the well-established, open-source third-party libraries out there. Like, for instance, Polly. That's when third-party dependencies come into picture. All the code that your application uses (for example, in form of NuGet packages or even framework libraries) which you and your team haven't written yourself and don't have control over - that code is typically a third-party dependency. Missing control of the third-party code is the key point here: you can't assume that developers of third-party dependencies take security seriously enough. And even if they do take it seriously, no code is perfectly secure and impenetrable - security holes may suddenly be discovered in a specific, previously known as secure, version of the dependency. That's when you need to have a process in place so that you can get informed in case you're using a vulnerable version of the dependency and need to upgrade to a newer version, install a security patch or remove the dependency from your project.

A process like this can be implemented with help of Software Composition Analysis tool like OWASP Dependency Check.

What is Software Composition Analysis (SCA) ? This is a process of managing open-source components in your application. With help of SCA tools you can get more visibility into external dependencies being used, including transitive dependencies (the ones included by external components). SCA tool can be included in the build pipeline for continuous scanning of third-party dependencies - this is also an important part of DevSecOps adoption.

Now, let's see what OWASP Dependency Check tool is and how it can be included in your build pipeline.

What is OWASP Dependency Check (ODC)

The Open Web Application Security Project (OWASP) is a nonpofit foundation whose main goal is to improve software security. OWASP stands behind several open-source software projects that are used by thousands of developers and organizations worldwide for security strengthening of their software. You might also have heard about "OWASP Top 10" which is a document that is continuously updated by OWASP and defines 10 most critical security risks for web applications. If you haven't read it yeat, I do recommend you to check it out: The OWASP Top Ten.

What I also love about OWASP is that some of their core values are openness, inclusion and integrity:

OWASP Dependency Check (ODC) is one of the tools created by OWASP, obviously. The tool was first published in 2012 and has since then evolved quite a lot - it has had over 100 releases, and almost 200 developers from all over the world have contributed to making ODC such a great tool that it is today. Jeremy Long is the lead architect and developer for the tool and is the one who actively maintains and contributes to keeping the tool updated on GitHub. ODC is available both as command line tool, Azure DevOps extension, Maven/Gradle/Jenkins/SonarQube plugin and several others. ODC fully supports scanning of .NET and Java applications, and it also has several experimental analyzers for other languages, like Python and Ruby, that can be enabled on-demand.

So how does ODC work? It will scan through all the project dependencies and try to detect if any of those dependencies include publicly disclosed vulnerabilities. ODC does this by collecting as much information as possible about each dependency in order to identify The Common Platform Enumeration (CPE). If CPE is identified, it will add all associated Common Vulnerability and Exposure(CVE) entries in the report. Main data source used by ODC are National Vulnerability Database(NVD) data feeds provided by NIST, but additional feeds, like Sonatype OSS Index, can be utilized.

Go to OWASP Dependency Check for Azure Pipelines page in Azure DevOps Marketplace and click "Get it free". You will be navigated to a new page where you can either choose an existing Azure DevOps organization to automatically add this extension to, or you can download the extension directly by clicking "Download" in order to manually upload it to your Azure DevOps server later. 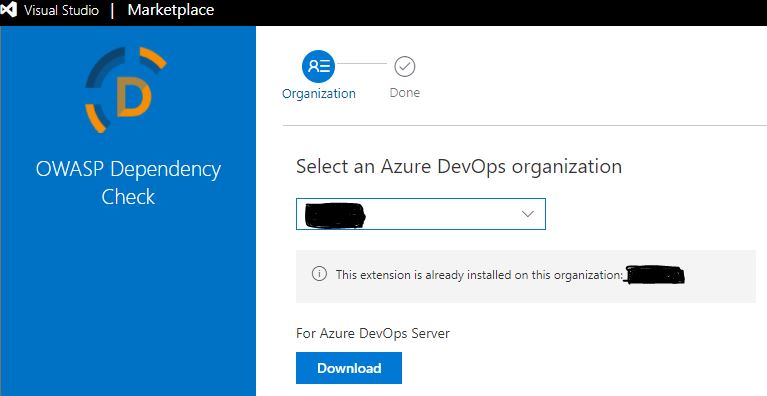 The extension is already installed for my Azure DevOps organization so you may need to check if requested extension must be approved by the administrator after you've added it, before you can start using it in your build pipeline.

Next step is to add a build task to your pipeline in order to continuously perform security scanning. OWASP Dependency Check supports several file type analyzers, you can find an overview here: File Type Analyzers. You can, for example, use Nuspec analyzer that will parse NuGet package specification file, or Nugetconf analyzer that will parse NuGet packages.config file. In my case we're using centralized management of NuGet package versions so we can't use any one of the mentioned file type analyzers. Therefore, we've decided to use Assembly analyzer to perform security scanning of all .NET .dll and .exe files in our applicaiton.

Security scanning may take time, especially when you have quite big application with hundreds of assemblies, therefore I would recommend to create a separate job in your build pipeline that will execute security-related tasks in parallell with the rest of the build tasks. Another benefit is that, as you add more security controls to the build pipeline, you can group them under the same build job, and have a central place where all security controls are defined. It will then be much easier for you and other developers or even security auditors to get an overview of all security checks implemented as part of the application's secure development lifecycle.

Please note that initially OWASP Dependency Check Azure DevOps extension supported only Windows build agents but since 2020 support for running on Linux build agents has been introduced. In order to start running ODC Azure DevOps extension on Linux build agents, you need to ensure that your Azure Pipelines Job is using Linux build agent (see vmImage property in code snippet below) and that you're using latest version of the task - dependency-check-build-task@6. If you're using dependency-check-build-task@5, you will need to update it to version 6 since version 5 only supports running on Windows.

Here's an example of how such security job can look like:

One of the build tasks publishes scan results for each build so we can check in more detail what vulnerabilities have been discovered during scanning, what the CVSS scores are for each vulnerability, where each vulnerability was registered, etc. In the example above I have defined 2 formats for the report:

As you can see, it's pretty easy to enable continuous security scanning with OWASP Dependency Check as part of CI/CD pipeline. Different values like CVSS score (failOnCVSS) or format of scan result report (format) can be adjusted, depending on secure development practices in your team.

Now that we've enabled continuous security scanning of third-party dependencies with OWASP Dependency Check, we need to be prepared for fixing discovered vulnerabilities. Let's say that I've just executed the build pipeline and it has failed during security scanning with an error message saying that a vulnerability has been discovered in one of the application's assemblies with CVSS score higher than 8.

How can we proceed from here? First, we'll open the report and locate the assemblies with CVSS score 8 or higher. Then we'll need to analyze each assembly individually and decide how to fix the discovered vulnerability. You can find more information on how to read OWASP Dependency Check report here: How to read the reports.

There are two possible scenarios:

How can I suppress the vulnerability?

If you need to suppress the vulnerability, you will need to create a suppression file (or update one if it already exists in the repository). You can place the file in the root of your source code repository but it can also be placed in a different location - as you saw earlier, location for the suppression file must be provided in the build task for OWASP Dependency Check (suppressionPath). Add a new <suppress> -node to the bottom of the suppression XML with a comment describing why this vulnerability is being suppressed. If you have several assemblies that are linked to the same vulnerability with the same CVE, you can include those in the same suppression node, as shown in the example below. Some vulnerabilities may have been published with multiple CVE-s and in that case you will need to suppress the vulnerability for every CVE it was registered with. If you have projects that have separate binary output folders, you will need to add a separate suppression node for every binary output folder where this assembly exists. You can find more information about suppressing vulnerabilities here: Suppressing False Positives.

Here is an example of a suppression definition for a vulnerability related to MS Office 2013 that can be fixed by installing a security patch provided by Microsoft:

And that's it - after the suppression file is added to the application's source code repository, we can re-trigger the build and it will no longer fail due to this vulnerability.

That's it from me this time, thanks for checking in! If you would like to know more about OWASP Dependency Check, you can find official documentation for the tool here: https://jeremylong.github.io/DependencyCheck

If this article was helpful, I'd love to hear about it! You can reach out to me on LinkedIn, GitHub or by using the contact form on this page :)